You are here: Home > Walks in Bingley > Myrtle Park in Bingley – Walks & Guide

Myrtle Park is in the heart of Bingley and as such is one of the most popular outdoor places in town. It’s a huge park with a variety of native trees and wildlife and a large meadow nestled in one of the meanders of the River Aire – two pedestrian bridges allow visitors to cross the river. It’s been home to many annual events such as the Bingley Show, Bingley Music Live and Bingley Biathlon as well as the weekly Park Run. It is a well cherished asset and although owned by Bradford City Council, the newly formed “Friends of Myrtle Park" community group is now looking after it to make sure that future generations can enjoy it as we all do now. And of course, it’s the perfect location for a stroll, a dog walk or the start or finish of a longer walk.

4. Events in the park 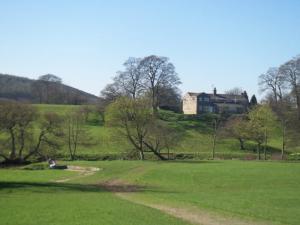 View of House above River Aire banks in Myrtle Park

The Friends of Myrtle Park were formed in 2019 and their aim is to keep the park as beautiful as it is for everyone to enjoy. There are regular events for volunteers to attend and help maintain the park. They have now acquired the old Veterans hut next to the Bowling club and are establishing their HQ there.

The origins of the park are from the 18th century when Johnson Atkinson Busfield bought the land in 1767 and in 1772 built Myrtle Grove which later became the Bingley Town Hall. The park actually opened to the public in 1909 and now belongs to Bradford City Council. Below is a list of the most famous features:

It is currently owned by City of Bradford Metropolitan District Council and used as offices for more than 100 employees in the Council’s Adult Services department. It is usually closed to members of the public. When Bingley was an Urban District Council from 1894 to 1974, Councillors used to meet in the wood-panelled Council Chamber.

The War Memorial is one of the main features at the top of the park. It's well looked after and often surrounded by some lovely flower beds. Every year during Remembrance Day a military parade takes place to honour the fallen local soldiers. You can find the full details on the Imperial War Museums website. 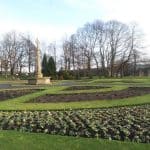 Myrtle Park Bowls Club was founded in 1926 and is still going strong with regular training and competitions happening almost all year round. With Tarquin's Tea Rooms located in the same historic 100 year old Pavilion building, it's a great spot for a relaxing day out watching the games.

The Menagerie - Birds and Rabbits

Located on the left hand side of the old Pavilion where Tarquin's Tea Rooms is based, this menagerie is made of an aviary hosting exotic Cockatiel birds and some rabbits – not in the same cage! It's always a nice visit to have with young children. 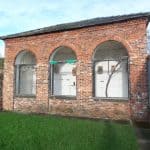 This elegant bandstand was built in 1913 and has remained in that location ever since. It used to host weekly brass band concerts between the two wars. Nowadays there are still some occasional concerts happening during the Summer. 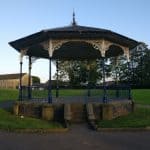 This sturdy green tubular bridge crosses over the River Aire and allows walkers to go up the river bank and towards St Ives Estate. There is an embedded inscription which says: “Festival of Britain 1951" 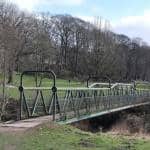 How to go to Myrtle Park?

When arriving in Bingley, look for the new Lidl Supermarket store on Main Street and then turn on to Myrtle Place. The park entrance is by Bingley Swimming Pool. Parking is restricted in this area but there are plenty or car parks nearby.

Several buses including the 662, 619, 622 and 760 stop on Main Street in Bingley. The closest bus stop is opposite the new Lidl Supermarket which is right next to the park. For bus timetable information contact Metro on 0113 2457676 or www.wymetro.com

Bingley is on the Leeds/Carlisle line and the Airedale line, and it has many frequent services including to and from Leeds, Skipton, Keighley, Shipley and Bradford. The station is just a few minutes walk from the park.

Which facilities can you find in Myrtle Park?

Below are the facilities that the public can use for free: 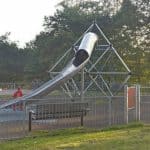 Playground: There are two play areas including one for young infants. They are well looked after and are very popular with the locals. 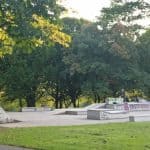 Skate Park: Opened in 2009, it is located near to the older children's play area. 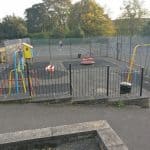 Tennis and Basket ball courts: located next to the infant's play area they are free to use for all.

Although not strictly within the park, Bingley Pool is right outside. It almost disappeared but thanks to the local community it was brought back to life by the Friends of Bingley Pool. It is still looked after by Bradford City Council but a community asset transfer is being planned. 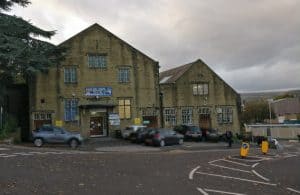 Entrance of Bingley Swimming Pool next to Myrtle Park

There's a single café in Myrtle Park called Tarquin's Tea Rooms  (formerly known as Café in The Park). It is located within the old Pavilion next to the bowling club. It's also an ice cream parlour so it's a perfect place for a break after a stroll around the park, a play with the kids in the play area or a long walk on one of the many paths criss-crossing the park. The café is also dog friendly, so don't hesitate to bring your four-legged friend in!

What happened to the former Bradford & Bingley HQ?

The Bradford & Bingley name was created in 1964 following the merger between the Bradford Equitable Building Society and the Bingley Building Society which were both founded in 1851. In the early 70's a major redevelopment scheme of Bingley comprising Myrtle Grove, Chapel Lane, Main Street and 7 Dials areas saw the erection of a concrete tiered building, designed to reflect the nearby Five Rise Locks landmark. This became the new headquarters for Bradford & Bingley and opened in 1975. Over the years the design and sheer size of the building was seen as an eyesore by many residents and visitors. In 2008 the bank collapsed and the B&B headquarters building was left empty for years before demolition finally started in 2015. Unfortunately the site was left empty for another few years before the Supermarket Lidl was able to build on it and opened a store in 2019.

With the B&B building now gone, the view of the town and the rest of the valley from Myrtle Park has dramatically changed!

Below are a series of pictures showing the evolution of the demolition of the Bradford & Bingley headquarters: 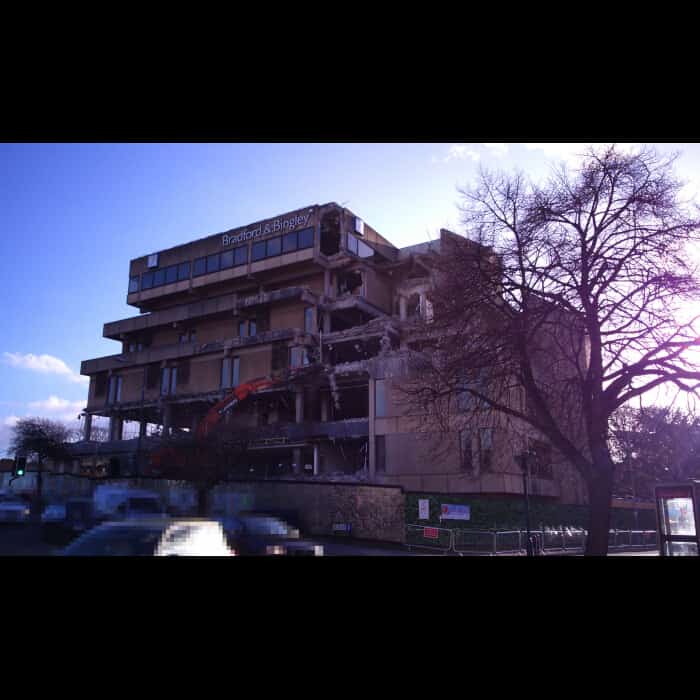 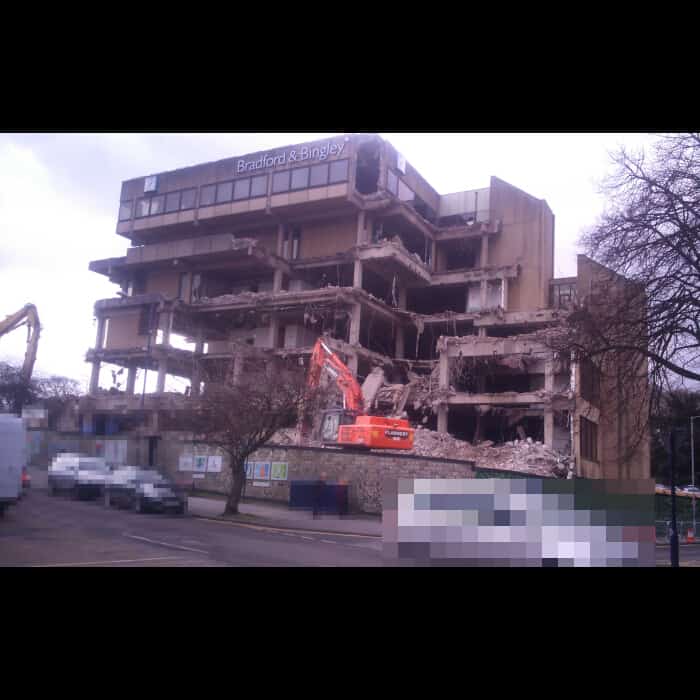 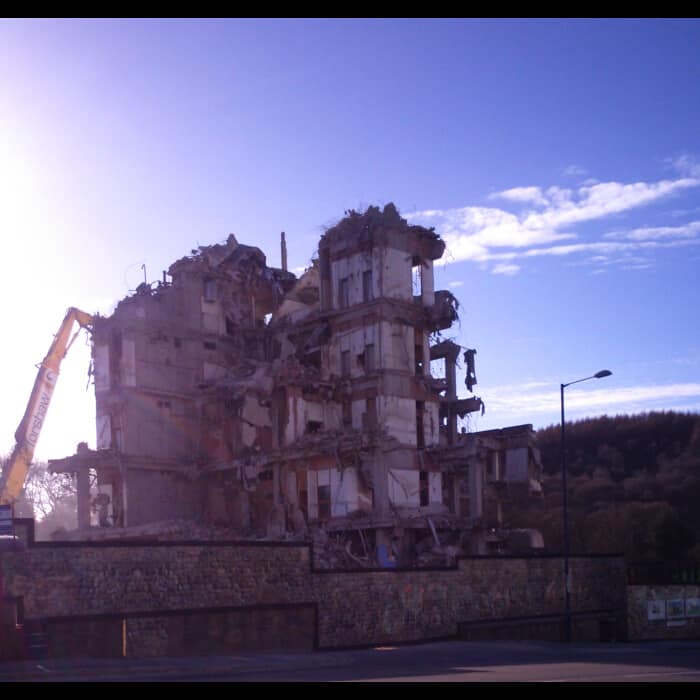 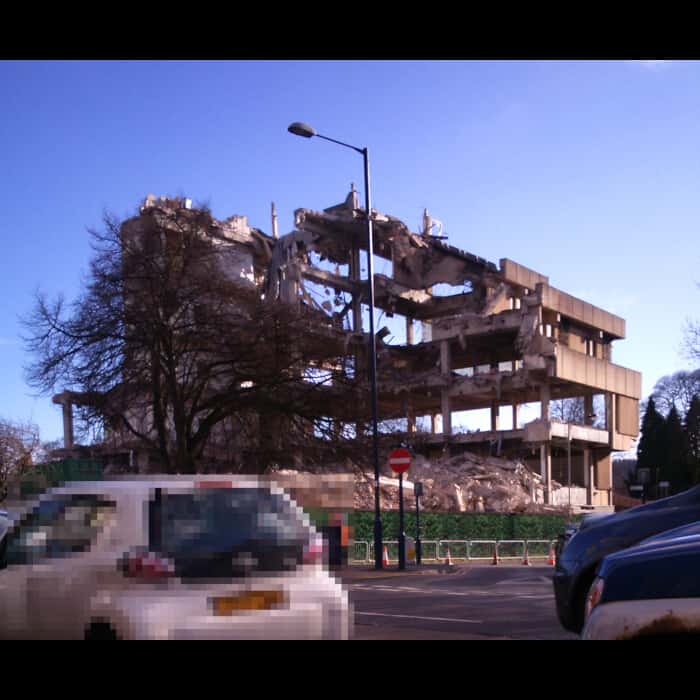 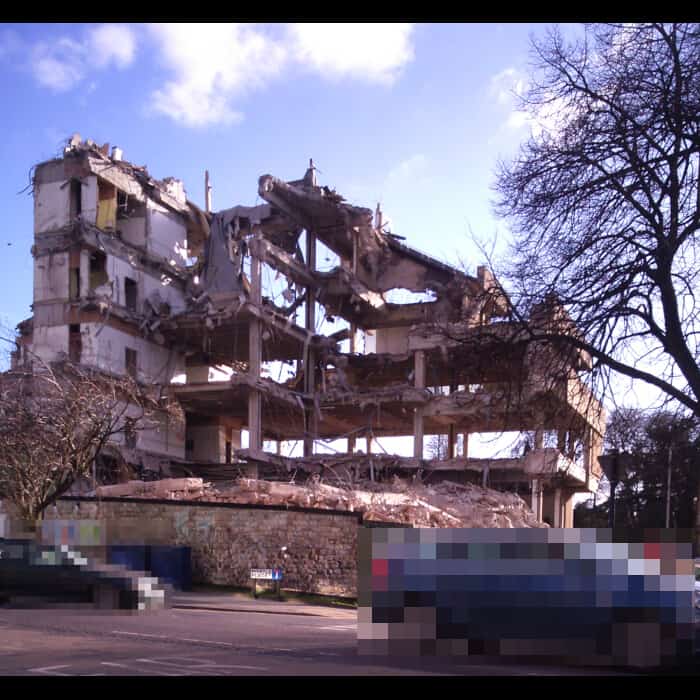 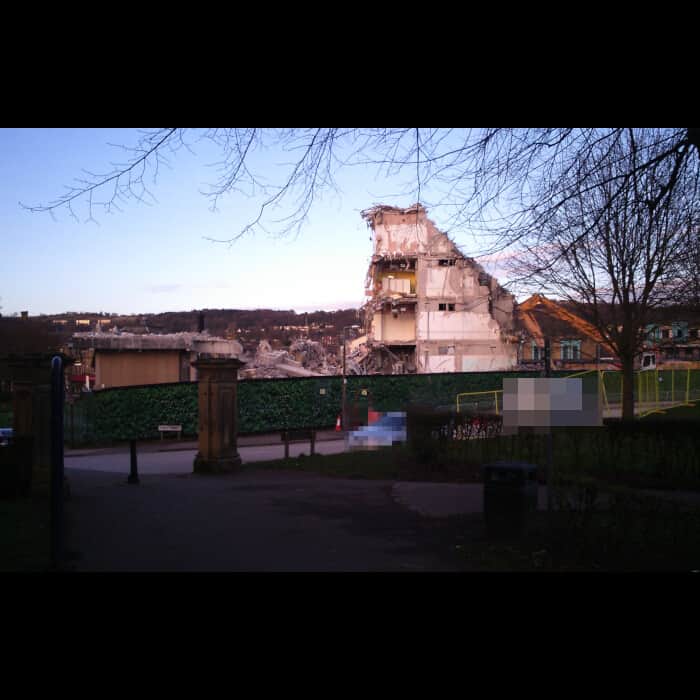 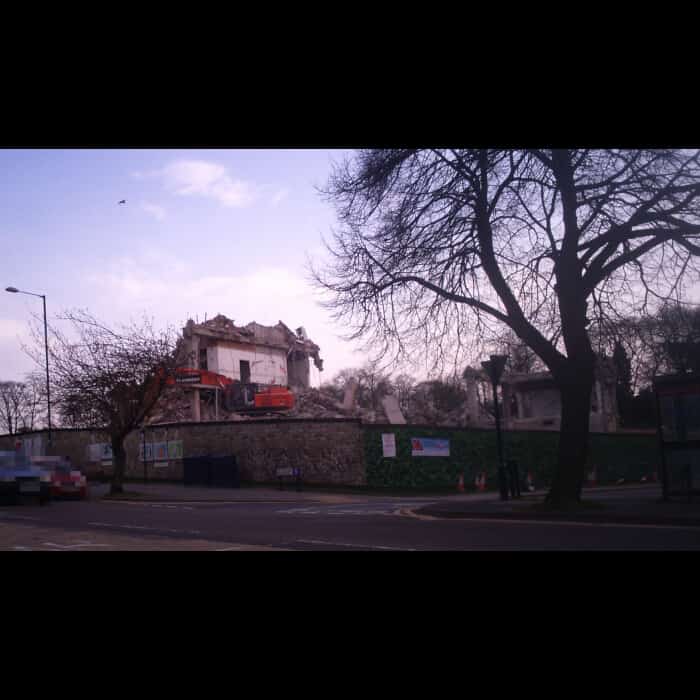 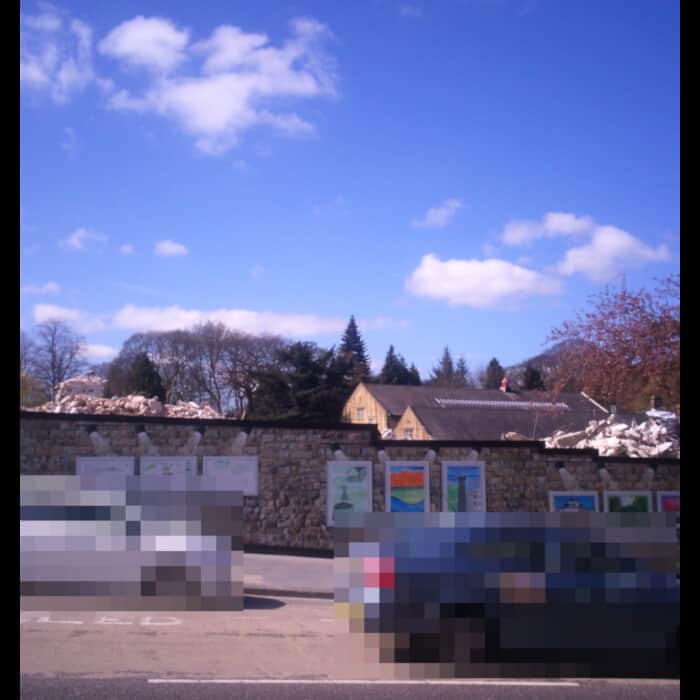 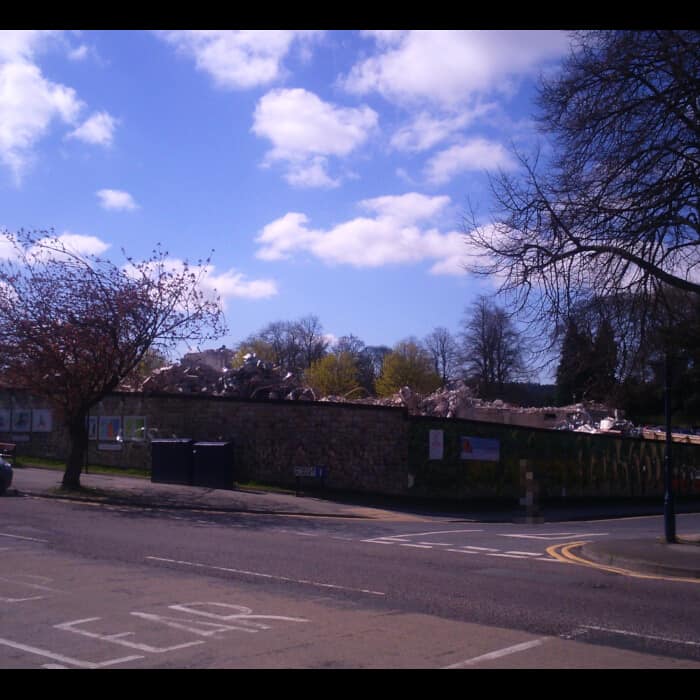 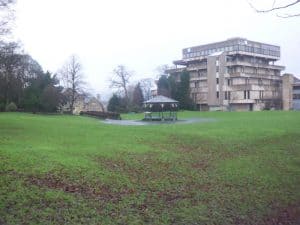 View from Myrtle Park before demolition of Bradford & Bingley Headquarters 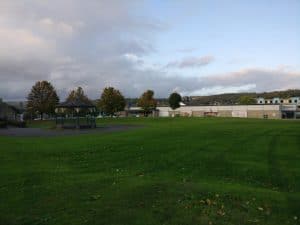 Below are some of the many walks which start or finish from Myrtle Park. From a short family friendly walk around the park and the river to a proper hike, Myrtle Park will welcome all walkers!

Myrtle Park is a real gem for every one in the family. This walk will show you all the beautiful aspects of it. From bandstand to river bank, there is something for everyone in this family and pram-friendly walk!

A variation of the previous walk, this one is for the more adventurous with paths taking you up the hill above the River Aire bank. A great way to discover beyond Myrtle Park without much effort!

Discovering Bingley – A walk around the town

This easy walk will take you all around town on a walk of discovery, starting with Myrtle Park! It's one of our favourites and is perfect for first time visitors or residents alike.

An easy wildlife walk which will take you along the riverside and through woodlands with a finish in Myrtle Park. Good chances of seeing deer and kingfishers!

The River Aire and the Leeds and Liverpool canal form an easy to follow route on this walk. You will also see a local architectural wonder known locally as the “Seven Arches Aqueduct".

A great walk combining history and nature and going through Myrtle Park, St Ives Estate and the Black Hills above Harden. There is quite a bit of a climb half way through but the views are rewarding!

St Ives estate near Bingley is a popular destination for all types of leisure activities. It’s a big wooded estate and is owned by the Bradford & City Metropolitan District. This walk will take you all around its boundaries.

Norr Hill is a prominent feature above the Aire Valley and at 262m/859ft of altitude it’s definitely worth a visit to see the great views from there! At the top is a triangulation pillar, so another excuse to make this walk in particular and maybe start the habit of “trigbagging"?

A ramble in the Harden Valley

The Harden Valley, in the heart of the Brontë Country is definitely a little gem of a ramble on a nice sunny day! You won’t be disappointed by the variety of features it has to offer: woods, waterfalls, viaduct, moors and of course the views!

To the south of Bingley and starting in Myrtle Park, this walk which is 25 miles combines rarely used paths with more popular routes. Places visited include Egypt, World's End, Queensbury and Haworth.

Events in the Park

Myrtle Park is host to annual events such as the Bingley Show or Bingley Music Live. It's a perfect setting for such big events bringing large crowds into town. However, there are other events worth mentioning such as the Brilliant Bingley Biathlon. And the park is only a stone's throw away from Market Square which is host to the monthly Bingley Market and the annual Christmas Fayre. Not to forget the Bingley Arts Centre which has a great programme of events happening all year round. Finally, our annual Walking Festival and monthly Sunday Walks start from Market Square and many of our guided walks are likely to go through Myrtle Park.

Every Saturday at 9:00am, Myrtle Park is now host to an official Parkrun where 150 people on average come to run 5k on a four-lap clockwise course around the park using hard paths and short grass sections. Starting and finishing by the bandstand.
Go to the official site!
We use cookies on our website to give you the most relevant experience by remembering your preferences and repeat visits. By clicking “Accept”, you consent to the use of ALL the cookies.
Cookie settingsACCEPT
Privacy & Cookies Policy

Any cookies that may not be particularly necessary for the website to function and is used specifically to collect user personal data via analytics, ads, other embedded contents are termed as non-necessary cookies. It is mandatory to procure user consent prior to running these cookies on your website.